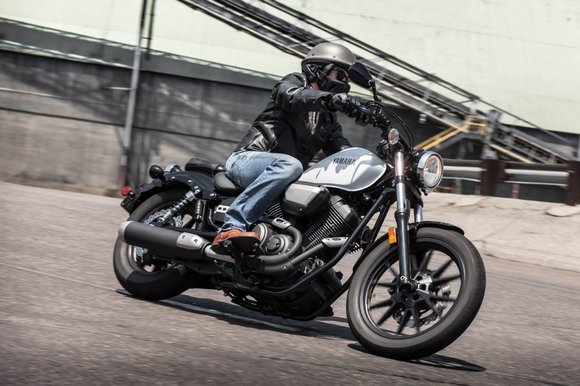 Almost everything on this cruiser can be modified or swapped to give you a bike that suits your mood, writes Pat Malone.

THE DIFFICULTY of predicting what’s going to be cool a few years hence knocks years off the lives of motorcycle designers. Bet the farm on a dog and you can kiss your career goodbye, and maybe even tip the company over the weir. Never has youth been more fickle, attention spans shorter or designers’ nightmares more lurid.

So with the XV950 Yamaha has either given up altogether or pulled a brilliant stroke; I’m not sure which. It’s the first bike that’s designed to be made entirely in the image of the owner — in effect a modular kit on which almost everything can be modified, changed, swapped or upgraded. No two need ever look alike and none need look the same two years running.

Custom bikes have always come with a fat accessories catalogue, but the XV950 takes this to extremes. Changing parts is so simple my granny could do it. You just undo a bolt or two and screw another bit on. You’ll never have to break the loom or reroute a pipe, and in fact the dealer will do whatever job you want anyway. You can change your bike daily to suit your mood, if the fancy takes you.

Will it work in the market? Well, the early signs are that youngsters like it, and anything that brings young, hard-to-reach fashionistas into biking has to be good.

The basic bike is — well, basic. Take the speedometer: it’s round and it shows speed, with a light for neutral. That’s it. Then there are handlebars, a seat, fuel tank, some wheels, a V-twin engine and that’s your lot. Stylistically it’s perfectly acceptable off the peg, but I think you’d want the optional extras book from day one.

The big cruiser market has gone flat in Europe; as the price has gone north the market’s gone west. Smaller customs such as the XV950 are faring better. The Yamaha is low and light, with relatively narrow bars and a comfortable, natural riding position. It has a few awkward touches: my right knee knocked the airbox cover, my left knee caught on the cylinder head and the footpegs chafed my ankles — but guess what, you can set them forward.

Fire the bike up and it sounds nice and growly. If you don’t like the noise, change the silencer. The throttle feels catchy but there’s plenty of poke and ample torque. The engine came out of the Midnight Star — the company’s largest bike — and has been slightly tweaked for better performance. In true cruiser fashion the XV950 isn’t comfortable with being flung through bends and the lack of a fairing means the rider is happiest at low speeds. Suspension is better than average for a cruiser, but the XV950 is a bike for a sedate weekend ride, not for scorching around the track.

That’s on a Sunday. By Monday you can have wire spokes, buckskin seats, a pair of saddlebags . . . come Tuesday you can choose the cafe racer look and on Wednesday you might dip into the flat track kit. So far, Yamaha has made the basic bike available and has promised that the equipment of your choice will be along directly. So a couple of years from now, when your mates’ super-sportsbikes are starting to look their age, you’ll be able to trick up your XV950 with whatever new gear you fancy and still be ahead of the game.