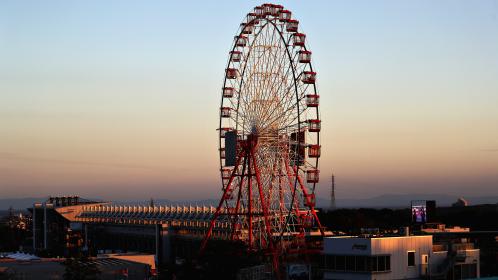 There were thousands in the grandstands and an engine had not even been fired up. Suzuka is Japan’s temple of motor racing, where the fans worship a sport they can see only once every year when the Formula One roadshow rolls into town.

There were fans in full race suits, another with a puppet of Michael Schumacher and one woman whose body was decorated head to foot in Formula One tattoos. Hordes of schoolchildren were given the day off from the classroom to wander the grandstands and gawp at the mechanics in the pits preparing their mechanical charges for action.

Suzuka is one of Formula One’s traditional venues, a classic circuit with decades of history

There might have been as many people in Suzuka on Thursday when nothing was happening as there were last Sunday for the Malaysian Grand Prix. The difference in atmosphere could not be starker or the difference in philosophy more striking.

Suzuka is one of Formula One’s traditional venues, a classic circuit with decades of history. Malaysia, though, is an outpost and a representative of a billion dollar industry whose time is over.

The era when Bernie Ecclestone snapped his fingers and a government poured hundreds of millions into constructing a monument to Formula One is at an end — and Ecclestone is the man who has called time because even he can see that too many have turned into grand follies.

The list of failures is as impressive as any list of Olympic venues that starred on television screens around the world for a fortnight but now play host to tumbleweed. Turkey, India and Korea all spent a minimum of £200 million building huge circuits only for Formula One to desert them when it became clear the money had run out and the crowds had failed to come in.

Formula One circuits became the ultimate vanity project for governments, dictators and tyrants — from Bahrain to Russia. Everyone wanted a huge palace of varieties where the cars were fast, the women glamorous and money poured in. Until they discovered that huge race tracks costs huge money to maintain and when Formula One goes home after its three-day binge at your expense, there is nobody left to fill the empty space.

Malaysia started the gold rush in 1999, three years after meeting Formula One’s chief executive at a race in Portugal. They were ambitious to put their country on the map and Ecclestone told them to build a circuit. They went home and splashed the cash and Sepang, an architectural wonder under an airport flightpath and on a plot of land formerly occupied by palm trees, was born.

Contrast that with the delegation from Azerbaijan sent by Flavio Briatore to meet Ecclestone. They, too, wanted a vast motor-racing monument north of Baku, the capital. This time, though, Ecclestone advised a race around the picturesque streets. The first grand prix in June became an eye-catching travelogue that turned into the country’s best advert. And it didn’t cost a fortune or saddle the nation with a motor-racing white elephant.

Street circuits are in vogue. Just look at Formula E this weekend and contrast the glamour of the backdrop of high rises in Hong Kong with the vast emptiness of some of Formula One’s circuits. Bahrain, where there are more political prisoners than fans, found the answer by holding their grand prix in the dark. There is no one to see beyond the floodlights.

China’s circuit claims to be in Shanghai but is about an hour away by train. It is a vast, forbidding monolith with a paddock about the size of a Heathrow car park and is as welcoming as a gulag.

The warm-up day on Thursday — usually a barren, empty build up in the paddock overlooked by windblown grandstands — was packed with people

Liberty Media, Formula One’s prospective new owners, want more races but you can bet they will want them in the centre of cities and not on some remote track miles from anywhere. Street races bring their own atmosphere and it is no coincidence that when fans are asked for their favourites, they will name grands prix like Melbourne, Montreal or Monza — all races within touching distance of the city.

Fans in Baku spilled straight from the grandstands into the teeming streets of tourists and the galaxy of restaurants and bars. They wouldn’t have been able to do that had Ecclestone not steered the government away from building a circuit miles from anywhere.

Baku’s authorities can thank their lucky stars, for they are able to pull down the temporary grandstands and track furniture the moment Formula One leaves town instead of being left with a huge circuit with all the overheads that entails.

Suzuka is a wondrous exception: deep in industrial Japan, the countryside is unlovely and the track is a nightmare to get to — but it is worth it. There is a theme park around the circuit, a kart track and year-round attractions.

The warm-up day on Thursday — usually a barren, empty build up in the paddock overlooked by windblown grandstands — was packed with people dashing around the merchandising stalls, taking selfies and excitedly seeking out any famous face they could find. It is Formula One for the fans and not for the glorification of a government or dictatorship — just as it should be.

Turkey
Huge circuit was built more than an hour from Istanbul, forcing fans into a long trek. No tradition of motor racing meant no fans and it was cancelled after seven grands prix.

Korea
A disaster from day one. No one knew where Mokpo was — or cared. Lack of finance meant the track was locked up after the first grand prix (like the original promoter) and there were only four races before Formula One gave up.

Singapore
The floodlit race in the city is a brilliant addition to the calendar, rivalling Monaco for glamour but outdoing it for the presence of heavyweight visitors from global business. Best of the new venues.

Bahrain
A vanity project for the ruling Royal family meant a no-expense-spared facility in the desert. Unappealing country for Formula One tourists and low turnouts in the stands forced Bahrain to stage a night race to glam up the event.

China
Soulless, smoggy and vast. Little interest in Shanghai and wider China. A race that kills the spirits.

United States
The Americans built a terrific track and put on a show, but the Circuit of the Americas is too far from the city and now is struggling to make ends meet.

India
New Delhi has a huge population, so they built a track in somewhere miles away called Greater Noida. It turned into one of Formula One’s greatest follies. There were only three grands prix.

Russia
Staged around the Olympic Park that was the centrepiece of the $40 billion Winter Games in 2014. Hopelessly difficult to get to Sochi, unappealing track and the surrounding seaside town is dismal. Likely to reach for the Bahrain option of staging the race under lights.

Azerbaijan
Although the street track failed to live up to expectations, it looked marvellous while Baku was a welcome surprise. Will attract a lot of Formula One tourists and become a fixture.

Abu Dhabi
Daft Disneyland. They spent all the cash — billions on the Yas Marina project in total — on creating a tourist paradise and built a circuit that is rubbish for racing. Nice if you like pretty lights.