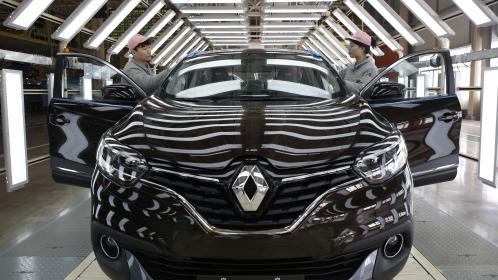 According to data from the European Automobile Manufacturers Association, demand in the UK, the region’s second biggest market, slipped by 0.8 per cent. That was the first sales fall in the country since last October and only the second in four years.

Analysts attributed the decline to uncertainty over Brexit, with some remaining cautious for the rest of the year.

Overall, total European registrations of new cars rose 6.5 per cent in June to 1.51 million vehicles, although that was the weakest improvement since March. First-half sales were ahead by 9.1 per cent at 8.09 million cars.

Among manufacturers, Renault, above, posted the strongest European sales growth, ahead by 20 per cent with a strong performance from leading brands Captur and Kadjar. There were also solid sales for the luxury marques Mercedes and BMW.

Sales at Volkswagen increased by 1 per cent, as it continued to struggle to recover from its emissions-testing scandal. Sales fell at the VW, Seat and Porsche divisions and were flat at Audi but rose at Skoda. Germany, Italy and Spain put on some of the biggest growth, with Germany, the region’s largest market, posting an increase in sales of 8.3 per cent.