Home > Racing > Mercedes charge up for Formula E from 2018 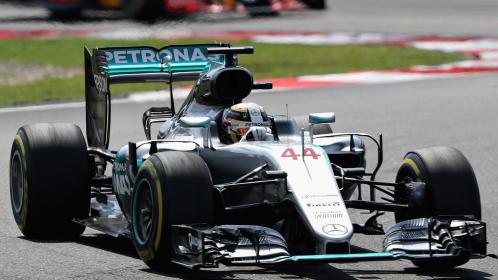 Formula One’s world champions have secured a place on the grid for the all-electric Formula E series in what could be seen as a threat to the future of the traditional pinnacle of motor racing.

Mercedes-Benz Grand Prix, the team that puts Lewis Hamilton on the Formula One grid, have signed up for a place in Formula E from 2018. Toto Wolff, the head of Mercedes Motorsport, concluded the deal with Alejandro Agag, Formula E’s founder and chief executive, before setting off for Sunday’s Japanese Grand Prix.

Electrification will play a major role in the future of the automotive industryToto Wolff, Head of Mercedes Motor Sport

When Agag first mooted the venture to race cars powered by electricity, he was decried by rivals and sceptics. Now he has a blue-chip roster of companies on board, including Jaguar, Audi, BMW, Renault and Citroën, and races in city centres from Hong Kong this weekend to Paris, Berlin, Buenos Aires, Brussels and New York.

Mercedes are contracted to Formula One until 2020 but with three constructors’ championships almost achieved and costs rising to astronomical levels, it is thought senior executives in Stuttgart are weighing up the options for the future.

While the move to hybrid engine power has been acknowledged as a technical tour de force, fans are thought to be ambivalent and manufacturers are unhappy that the Formula One authorities have failed to throw their weight behind it.

Although Formula E executives admit the limitations of their series at the moment — hampered by how long the batteries will last — technical developments are expected to come on by leaps and bounds. Every major carmaker in the world is now investing heavily in battery power and motor racing is seen as a fast-track way to develop.

Wolff admitted that Mercedes were “looking at all the options available in the future of motor racing”, and added: “Electrification will play a major role in the future of the automotive industry. Racing has always been a technology research and development platform for the motor industry and this will make Formula E very relevant in the future.”

Mercedes have the best engine development facility in the world at Brixworth in Northamptonshire where a British-led team of scientists overcame the complexities of hybrid technology capable of generating more than 1,000 horsepower.

That knowhow could quickly to be turned to harnessing electricity for racing at the same level of speed as Formula One.

The question for Formula One is whether it remains a technical pinnacle or is overtaken by Formula E. The writing on the wall was magnified by the decision of both BMW and Jaguar to join this season. Jaguar is pouring money into electrical development for road cars at its Midland headquarters, while BMW already has a model range on the market.

This may be a concern, too, for Liberty Media, the American conglomerate, aiming to take over Formula One by next year. Liberty will want a long-term game plan in return for scheduled investment of £6 billion and manufacturers — particularly the leading team that employs Hamilton, the three-times world champion — going over the pitwall to Formula E is not in that plan.

Meanwhile, Mercedes will have the engine that blew up under Hamilton in Malaysia last weekend back in Brixworth today to undergo investigations. The team hope to nail down what exactly went wrong to rob Hamilton of victory so that any further problems can be avoided at Suzuka.

However, executives stress that the team is on course to clinch a third world constructors’ championship for a third year in a row, while either Hamilton or Nico Rosberg, his team-mate, will be the champion driver.