Home > Choppers > I’m aiming for 450mph on a chopper bike 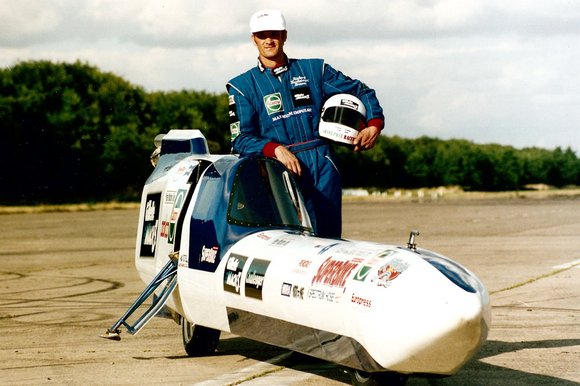 His bike may have stabilisers but do not be fooled into thinking Richard Brown is averse to risk — he is hoping to break the world motorbike speed record by travelling at almost 450mph.

For that the engineer will need something rather more advanced than a two-stroke engine, which is where a Sea King helicopter comes in. In his workshop in Oxfordshire, Brown has spent the past five years designing and building the 1,250 horsepower Jet Reaction bike, the first to be powered by a jet engine manufactured from the helicopter engine.

To balance the motorbike as it gathers speed, Jet Reaction is fitted with stabilisers that automatically retract when it reaches 40mph.

“I’m absolutely confident I can do it,” Brown said. He is aiming for an average two-way speed — all motorbike world records are based on an average speed from two runs in opposite directions — of at least 398mph (640kph).

The engine, re-engineered so that instead of driving a rotor it provides thrust, has just undergone its first stationary test firing at Westcott airfield in Buckinghamshire. It will progress on to “low speed shakedown runs” next month with Brown at the controls.

Fortunately he knows what he is doing. Brown broke the one-way motorbike speed record in 1999 when he reached 362mph (583kph) in a rocket-powered machine, the Mach 3 Challenger, before a puncture wrecked his chances on the return leg.

The two-way world record, held by Rocky Robinson, an American, is 376mph (605kph) set in 2010 on the Bonneville salt flats in Utah, where Brown intends to stage his own record attempt next year. The rest of this year will be spent on test runs and getting the bike up to optimum performance in Britain.

The Jet Reaction does not look much like the traditional motorbike. The rider sits inside the frame with feet forward and, in its finished form, the metal superstructure will be covered with an aerodynamic body shell.

“What I’ve done is taken a gas turbine which is usually used to power a very large helicopter and redesigned and re-engineered it to turn it into a thrust engine,” Brown said. 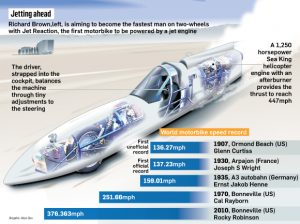 Riding it is surely terrifying? “Well, yes, that’s about what it is,” Brown confessed.

“It’s extremely difficult to steer. Unlike an ordinary motorbike you can’t balance it by shifting body weight. As you are sitting feet forward you have to maintain balance by constant, unnatural opposite steering changes.

“You have to do all this while everything is vibrating and the engine is roaring. It’s certainly quite a ride.”

The engine also has an afterburner that sprays fuel into the hot exhaust gases causing it to ignite and generate more thrust. “The afterburner is only used for a very short duration, much for the same reason as on a jet fighter, which only uses them for certain manoeuvres like takeoff on very short runways and various similar applications. That’s why it makes it ideal for a land-speed record,” Brown said.

“It will only ever run for a matter of minutes. As soon as I am stable at about 50mph I will engage the afterburner. A 400mph pass will require a distance of around 7.5 miles, including stopping.” The Jet Reaction is brought to a halt through a combination of disc brakes and parachutes.

Brown has not calculated the cost of the project to date. “I do everything from the design to the welding so I can do it at a fraction of the cost of paying someone to build it,” he said.

It is unlikely that the Jet Reaction will ever become a familiar sight on the roads, given that its turning circle is about the length of a football pitch and it consumes three gallons of petrol for every mile it travels.

What does Brown’s wife think of his obsession? “I think you can guess the answer. She would rather I collected stamps,” he said.