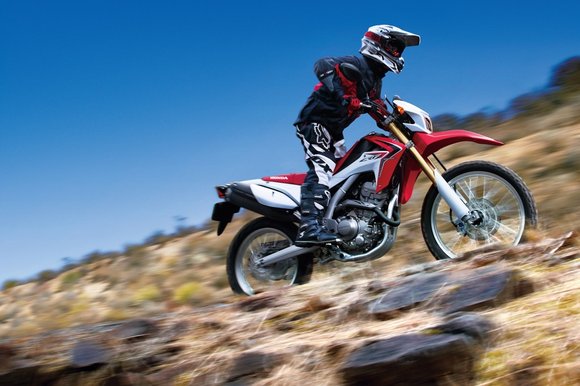 Honda’s new trail bike stars in the latest Bond film but it will also take the stress out of city jams.

What bike would you pick to ride to work if you had the money? A Ducati Desmosedici RR — £40,000 worth of exploding metal? Or maybe a Kawasaki ZZR1400, claimed to be the most powerful superbike available?

Both are so quick off the mark that they could pull a tablecloth away and leave the place settings intact. Imagine the admiring glances in the company car park. But then think about threading through the rush-hour traffic — all hot engine, gearchanging and fearing that someone will slice off your mirror, or worse.

No, you’d save that bike for sunny weekends — when you’d tell the family you were off to the newsagent to pick up The Sunday Times, then whip over the Cat and Fiddle Pass and back. On weekdays you’d want something practical, but still quick enough to zip through the gridlock, taking an occasional shortcut across waste ground. Something just like Honda’s new 250cc trailie, in fact.

When the world’s biggest motorcycle manufacturer designed this bike, its marketing department hoped it would appeal primarily to “green laners” — folk who enjoy pounding along muddy tracks for fun and who want to ride their bike to the countryside rather than have to put it on a trailer. What Honda’s engineers have actually come up with is the perfect urban runabout.

Off-road it performs competently, with a four-stroke single-cylinder engine — derived from the CBR but tweaked to produce more low-end power — and knobbly tyres that will push you through deep ruts and ooze. But it really comes into its own over potholes and cobbles, in the canyons between HGVs, and while avoiding inattentive cyclists and pedestrians.

I tested it along a notorious travel blackspot — the eastbound section of the Highway in east London that takes traffic through the Limehouse Link tunnel to the A13 — and christened it “the Jambuster”.

Honda claims 90mpg, which means even on urban runs the fill-ups don’t come too often, even though the 7.7-litre tank is a little on the small side and I suspect its true mpg may be closer to 70. Harsher critics have described it as dumbed-down and idiot-proof, but isn’t that what you want on the commute when your head’s full of other things?

You might think that Honda would be feeling pleased and hoping to open up a new niche in the market. But on the basis of past evidence, I’m not sure it knows what it has on its hands.

Last time the company came this close to the perfect dual-purpose machine was with the brilliant NX250 and the AX-1. Honda sold neither model in Britain and discontinued production in 1993, failing to see their potential and saying at the time that it wanted to concentrate instead on the sports bike market. Let’s hope this time it sees the light. If you need convincing, watch the trailer for Skyfall, the latest Bond film, and see a couple of R versions of the bike — the full motocross model —doing motorcycle gymnastics during a chase. Just don’t try it in rush hour.