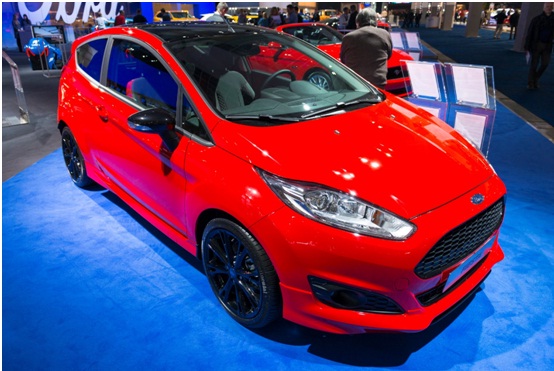 The Ford Fiesta is a very popular supermini which is sold in countries all around the world. Since its arrival in 1976, Ford has sold over 16 million Fiestas – this makes it one of their best selling marques behind the F-Series and Escort. The seventh generation was announced in Germany in late 2016, so how has the Fiesta evolved and improved to retain its popularity over the years?

The Fiesta was an immediate success back in 1976 thanks to its crisp and modern look, as well as the fact that it was Ford’s first ever front-wheel drive vehicle. It was originally to be called the Bobcat, but it would later be changed to Fiesta after setting up a new factory in Spain to build the car (Fiesta is “party” in Spanish). At the time, automobiles were much larger, so creating a vehicle of this small size was a huge gamble for the American manufacturer – one which paid off.

After 6 years as the best-selling car in its class in both Britain and Germany, the new Mk2 landed in 1983. Smoother, long and more aerodynamic, this version was popular due to the fact that it was more fuel efficient and a 1.6litre engine was introduced. 1989 proved to be a key year with the Mk3 as a 5-door version was available for the first time ever. It also came with a host of new features, such as electric windows and central locking.

By this point, hot hatchbacks were all the rage and Ford were at the forefront of this with the Fiesta. They continued to pioneer the market with the Fiesta RS Turbo with 128bhp.

An overhaul of the chassis, new styling inside and out and a new range of Zetec-SE engines arrived with the Mk4 which made this version the best-selling car in all of Britain between 1996 and 1998. Competition became fierce throughout the early 2000’s and the Fiesta took a back seat for a while, but the Mk5 soon arrived with airbags as standard, Anti-Lock Braking and a fresh facelift. It would go on to become the best-selling Fiesta to date.

Staying Ahead of the Curve

The Fiesta Mk 6 is based on the Ford Verve Concepts – a series of subcompact car concepts. These would prove to be immensely popular and receive universal praise, as well as scoop dozens of awards. Around the same time arrived the Fiesta ST, which is powered by a 1.6litre EcoBoost engine and would win Top Gear’s “Car of the Year” in 2013 and can be found in many online dealerships like Motorpoint.

Not only does the Mk7 have huge shoes to fill with its predecessor being the UK’s best-selling car, but it also enters an extremely competitive marketplace with dozens of superb hot hatches on the market. It features a revamped design but sticks to what has made it popular, whilst also introducing a whole host of new technology.

A look back through the Fiesta’s history shows how Ford has stuck to what has proven popular, but they have also stayed ahead of the curve by making slight adjustments with each generation. Whether it is by making it 5-door for growing families, injecting more power for speed demons or adding safety features for cautious drivers – Ford has stayed ahead of the curve whilst never straying too far from their original design.