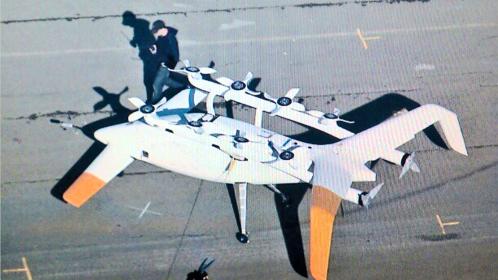 Even the most avid automobile nut must have given up on flying cars by now. Decades of promises have been broken by ugly, faulty and ultimately useless contraptions carrying extortionate price tags.

Not Larry Page, though. The Google founder has secretly poured more than $100 million (£70 million) of his own cash into flying car companies, according to a report yesterday. In a move befitting an eccentric billionaire, he built a secret “man cave” above one of the car companies he was bankrolling.

Flying cars, accepted as a certainty in so many novels about dystopian futures, have never got close to entering mass production and rarely, if ever, make it past the prototype stage.

However, recent advances in drones and self-driving car technology, such as that being developed by Google, have rekindled some of the old excitement around them.

At the start of the year, EHang, a Chinese technology company, unveiled the world’s first passenger-carrying drone. Critics scoffed at the 184 when it made its debut at the Consumer Electronics Show in Las Vegas but this week American officials gave EHang permission to test the vehicle in Nevada.

Mr Page’s money has gone to Zee.Aero, a start-up company located not far from Google’s headquarters in Mountain View, California, and Kitty Hawk, a recently formed offshoot of Zee.Aero. Little is known about either company and Zee.Aero, which was set up in 2010, has long stopped answering calls from journalists. However, what has emerged is that Mr Page is Zee.Aero’s owner.

He initially took the second floor of Zee.Aero’s headquarters, according to Bloomberg Businessweek. His “man cave” was replete with a climbing wall, expensive paintings and a rocket engine, the magazine said. To maintain secrecy, Page was referred to by Zee.Aero employees only as “Gus” — the guy upstairs.

Only a few grainy photographs of Zee.Aero’s prototype contraption have emerged. From those views it looks ridiculous. Eight tiny propellers adorn roof bars atop the platypus-shaped craft, probably to give it lift, with a further two at the rear, supposedly for forward movement and steering. There appears to be no space on board for a human, which would defeat the purpose.

However, according to Bloomberg Businessweek, a new prototype is being tested at a nearby airfield. It has a narrow body and bulbous cockpit with space for one person in the front and sounds like an air raid siren when it takes off. Google and Mr Page declined to comment.

Terrafugia, a US manufacturer, is seeking to launch a prototype of its flying car in 2018 before it enters production in 2024. The semi-autonomous TF-X will have fold-out wings with twin electric motors on each end that allow it to move from vertical to horizontal. Its 300hp engine will help the vehicle to reach a top speed of 200mph in the air. It will have a range of 500 miles. It is expected to cost about £180,000.

AeroMobil, a Slovakian company, is seeking to launch Europe’s first production flying car next year. It transforms from a car to a plane in about two minutes, reaching a top speed of 124mph in the air or 99mph on the ground.

It will likely be a toy for rich boys, though, costing “several hundred thousand pounds”.