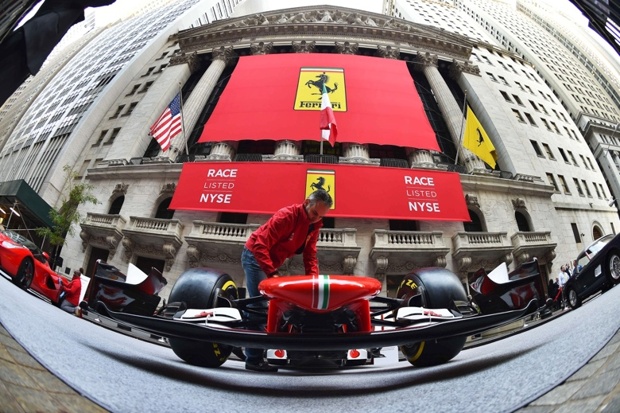 You may not be able to afford a Ferrari, but yesterday you could buy a share in the company that makes the luxury car as it began life as a public company with a listing on the New York Stock Exchange.

Demand for the shares, which trade under the ticker RACE, apparently outstripped supply by a considerable margin, not least because Fiat Chrysler Automobiles (FCA), the majority owner, limited the sale to only 10 per cent of shares to boost its attraction.

This is much the same as Ferrari boosts its exclusive image by shipping only 7,255 cars a year and keeping its waiting lists long.

Despite the apparent excitement among investors, some analysts questioned the valuation of about $10 billion that dealings put on the business, suggesting that it was inflated by the hype surrounding the prospect of owning a piece of such a luxury marque.

Others noted that the proceeds of the sale would go not to Ferrari itself, but to fund FCA’s ambitious €48 billion turnaround plan, centred on the revamp of its Alfa Romeo, Jeep and Maserati brands, as it seeks to boost global sales to seven million cars by 2018.

Others, such as Angelo Meda, head of equities for Banor Sim, were more sanguine, noting that the firm has consistently turned a profit and has an operating margin of 14 per cent to 16 per cent. That’s better than many other high-end car makers, such as BMW, although less than the makers of luxury goods such as Hermès.

Analysts at Renaissance Capital, an expert on company flotations, noted that, with the population of high-net-worth individuals growing worldwide, Ferrari aimed to increase shipments to Asia, especially China.

FCA will distribute its remaining 80 per cent stake in Ferrari to its own shareholders when that holding is spun off early next year. However, control of the company will remain tightly locked up as Piero Ferrari, the son of the brand’s founder, will retain his 10 per cent stake.

John Elkann, a descendant of Fiat’s founder, Giovanni Agnelli, and the head of the family’s business activities, said in an interview with Bloomberg after the start of trading that the Agnellis would retain their holding and work closely with Mr Ferrari.

The share sale injected some colour into what has been an otherwise sluggish market for company listings. In the past two weeks Digicel, the telecoms company that is owned by the Irish billionaire Denis O’Brien and sponsors the sprinter Usain Bolt and the West Indies cricket team, cancelled its planned float, citing “current conditions, particularly in emerging markets”.