Home > Auto/Bike Repair and Maintenance > Hello Dolly: how an old banger inspired a rebel schoolgirl to start a revolution in car repairs 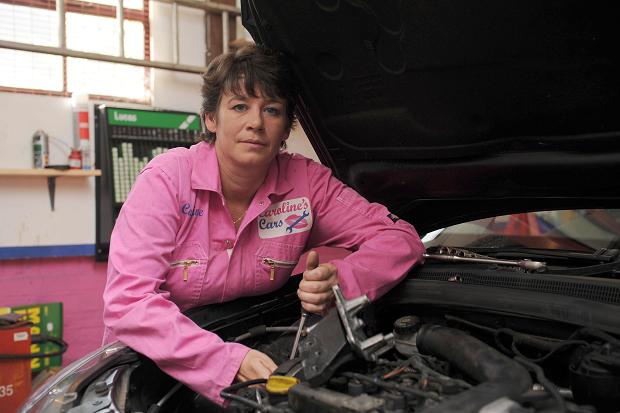 It was a succession of old bangers and a restoration project called Dolly that spawned Caroline Lake’s career.

Her parents were too poor to afford reliable cars and the bangers were always breaking down. Her father’s semi-permanent position tinkering away under the bonnets of a succession of jalopies encouraged Ms Lake to help him to fix them.

Then, when she was 16, he brought home Dolly, an ageing Triumph Dolomite. Armed with a manual and her dad’s support, Ms Lake got Dolly running. It was a short-lived relationship — Dolly’s condition was terminal — but it was enough to steer Ms Lake towards a career first as a mechanic and later as the owner of a car-repair service that strives to be different.

On an industrial estate eight miles outside Norwich, Caroline’s Cars bills itself as “a company set up to revolutionise the garage industry”. It may not have quite succeeded in that aim, but it is unusual in that it employs female mechanics and does not rip off, intimidate or patronise its customers in the way that Ms Lake says many garages do.

“I set up the business in 2006 having worked as a woman in the garage industry, which is obviously quite a rare thing,” she says. “I wanted to encourage young people, women in particular, to work in the garage trade and to encourage female customers that going to a garage shouldn’t be scary.”

She aims to offer a “people-friendly” rather than an exclusively female-friendly service. “Our customers include a much higher percentage of men than I expected but they come along for the same reason as the women — they know we are not going to rip them off and that we are going to provide an honest service.”

Ms Lake acknowledges that as a young, female petrolhead at school, she was unusual. “I could quote the nought-to-60 times of every single production car in the country when I was 14,” she says. Even so, there was no encouragement from her teachers to turn her interest and burgeoning Dolly-fixing skills into a career.

“When I was at school, girls were lucky if they got to do woodwork. We weren’t allowed to play football, rugby, and we certainly weren’t allowed to do metalwork. I was encouraged towards traditionally female roles — hairdresser, beautician, secretary. They wanted me to take typing. I said, ‘You’ve got to be joking’.”

Instead, she approached a local garage and offered herself as an unpaid apprentice one day a week. “I gradually built my way up by doing more unpaid hours and eventually they gave me a job. Perseverance was the key.”

Now, with her business well established and customer feedback positive, Ms Lake is keen to help other young people — men and women — who want to work in the motor trade. “I’ve employed probably five apprentices and I take people on work experience from schools in the local area three or four times a year.”

All of those who go on work experience are enthusiastic and ambitious, she says, and she aims to make the one or two weeks they spend with her as hands-on as possible. “There’s no point in just standing watching, because you don’t learn. So, as much as we can within the health and safety guidelines, we’ll let them undo wheel nuts under supervision or help with an oil and filter change, a basic service or anything we feel they can do while still being safe.”

Ms Lake is uncertain whether offering work experience brings a small business such as hers a rapid return, but says: “I’m so keen personally to encourage people to overcome the things that I encountered.”

Despite her attempts to break down the barriers that have discouraged young women from becoming mechanics, she says the motor industry remains mostly male. The girls she takes on who are studying for NVQs in related subjects tend to be the only women in their class.

“Attitudes have definitely changed but there’s still a long way to go. This is still considered a man’s job. It’s that stereotypical view that you need to be strong, you need to be butch, but that’s not the case at all,” she says. “Women make excellent mechanics. They’re great problem solvers, have a tendency to be more dexterous, they have less of a tendency — slightly less, anyway — to lose their tempers and throw their tools round the workshop, and they’re good communicators. That’s stereotyping, but women do have lots of skills that makes them great mechanics.”

Ms Lake is halfway through writing a manual on car repairing aimed at women and when it is finished she wants to look into ways of franchising the Caroline’s Cars brand.

A more immediate concern is keeping track of borrowed tools. One of her two sons works for a motorbike race engineering business in the unit opposite hers and has been known to cadge a spanner or two from his mum. Her other son works for Mitsubishi Motors, on the sales side. “I’m very proud that they’re both in the motor industry,” she says.

The Times has teamed up with Barclays to support the LifeSkills programme.

By 2015, LifeSkills aims to equip a million young people with the skills they need for work and to connect them with opportunities to experience work.

LifeSkills is dedicated to getting young people thinking about work skills and taking part in work experience opportunities.

It gives teachers access to a range of curriculum-linked resources to develop the skills that employers seek, including writing CVs, managing money and building self-confidence. There is also a matching service to link students, via their schools, with local work experience. Businesses of all sizes can sign up to offer these work experience opportunities.

To find out more visit barclayslifeskills.com.