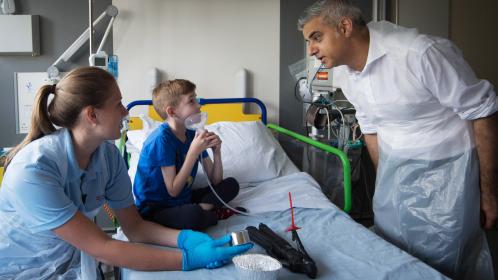 Drivers of diesel cars face the world’s toughest air pollution penalties under plans for London that could be extended to other cities.

A £10 daily “toxicity charge” will be imposed next year on petrol and diesel cars and vans made before 2005 entering central London. This will be added to the £11.50 congestion charge, Sadiq Khan, the mayor of London, said.

By the end of the decade the fee will be extended to pre-2015 diesel cars and the charging zone will become ten times bigger, affecting 210,000 drivers a day, according to projections by the mayor’s office.

Mr Khan said that he was planning the “toughest emission standards of any major city in the world” to help reduce the 9,500 premature deaths a year that are linked to air pollution in the capital.

The government pledged last year to penalise older taxis, buses and lorries in new “clean-air zones” in Birmingham, Leeds, Southampton, Nottingham and Derby. At the time ministers said that cars would be exempt from restrictions, but the environment group Client-Earth is bringing a High Court challenge calling for the government to take tougher action.

Under Mr Khan’s plans the ultra-low emission zone will be expanded from central London to the North and South Circular roads. The charge will be in place at all times. Thousands more roadside cameras will be installed to catch and fine drivers who fail to pay.

The scheme will penalise thousands of drivers who bought a diesel car believing that it produced fewer emissions. Mr Khan said that older diesel cars produced up to 20 times as much air pollution per mile as petrol cars. The mayor urged the government to work with him to launch a national scrappage scheme under which a driver trading in a highly polluting vehicle could receive a discount on a cleaner car.

Mr Khan announced his proposals at Great Ormond Street Hospital, where he visited children who were being treated for respiratory conditions exacerbated by poor air quality. His plans, due to be implemented after two rounds of public consultation, go much further than those of Boris Johnson, the previous mayor, who had proposed a pollution charge starting in 2020 and limited to central London.

The “toxicity charge” implemented by Mr Khan, which will increase from an extra £10 a day to £12.50 in 2019, will not apply to taxis and Uber cars. Local residents are expected to continue receiving a 90 per cent discount, at least initially.

Mr Khan, who suffers from adult-onset asthma, said: “It is the 60th anniversary of the Clean Air Act of 1956, which was passed following the great London smogs of the 1950s. Just as in the 1950s, air pollution in London today is literally killing Londoners. But unlike the smoky pollution of the past, today’s pollution is a hidden killer.

“The scale of the failure to tackle the problem is demonstrated by the failure of the government and the previous mayor to meet legal pollution limits. Urgent action is now needed to ensure that Londoners no longer have to fear the very air we breathe.”

Mr Khan said research had shown that 443 schools in the capital were in areas exceeding legal pollution levels.

Peter Steer, chief executive of Great Ormond Street Hospital, said: “The mayor’s drive to clean up the capital’s air is fantastic news for our patients and staff. Children living in highly polluted areas are four times more likely to have reduced lung function in adulthood, yet improving air quality has been shown to halt and reverse this effect.”

Mr Khan supported calls by ClientEarth for a new clean air act. About 40,000 people die prematurely from illnesses linked to air pollution each year in Britain.

The mayor is also preparing announcements on pedestrianising streets in the capital, potentially including Oxford Street, and installing hundreds more charging points for electric cars.

Jenny Bates, air pollution campaigner for Friends of the Earth, said: “Sadiq Khan’s call for a diesel scrappage scheme is a great start to help reduce dirty diesel fumes, but to save lives we must look to both phase out diesel and reduce traffic to make the air we breathe safer.”

A government spokeswoman said: “Improving air quality is a priority for the government and our plan clearly sets out how we will tackle air pollution through a new programme of Clean Air Zones alongside national action and continued investment in cleaner technologies.

“We welcome the mayor of London’s commitment to improving air quality in the capital and ministers will be meeting with him shortly to discuss how we can work together. UK air quality has improved significantly in recent decades and the Clean Air Act has played a vital role in this. Since 1970 sulphur dioxide emissions have fallen by 95 per cent, particulate matter by 73 per cent and nitrogen oxides by 69 per cent.”