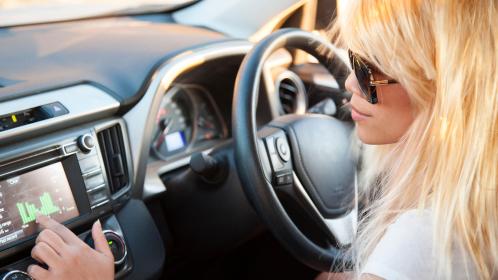 Car makers are not doing enough to stop drivers being distracted by touchscreen entertainment systems, the man in charge of Britain’s main roads has warned.

Most big manufacturers install screens the size of tablet computers in new models. They allow drivers to receive messages and updates from their phone and, in some cases, social media accounts.

Most systems include sat nav mapping and music and allow drivers to dictate text messages and have incoming messages read to them.

Some manufacturers have systems that allow drivers to receive Facebook and Twitter updates at the wheel, and even to use TripAdvisor to find restaurants and hotels.

Audi has a system allowing motorists to read news headlines and stories on a 7in screen on the dashboard.

Its Audi connect, which was launched last year in the A3 hatchback and is being introduced in other models, can also receive Twitter updates. Drivers can use it to search for events such as concerts, plays and art exhibitions being held at their destination and read long descriptions of them on screen.

Volvo has installed a touchscreen which is larger than some iPads in its new XC90 family SUV. Drivers use their fingers to “swipe” between displays and “pinch” to zoom in on information. Some functions on the screen are disabled above low speeds.

Toyota’s Touch 2 system allows Twitter to be used, although it is disabled when the car is moving.

The NissanConnect system, which is available in Juke, Leaf and Qashqai models, lets Nissan drivers use Facebook, Twitter and TripAdvisor. The company said some functions on those apps were limited when the car was moving.

The Sunday Times has learnt that the Advertising Standards Authority is investigating a television advert for Vauxhall’s new Corsa, which showed a female driver swerving her car after she was seen trying to use an app on the car’s 7in screen.

Vauxhall is one of more than 40 manufacturers that have systems linked to Apple’s CarPlay, which allows drivers to access compatible apps and dictate text messages. The authority is investigating whether the advert, which appeared this year, condones or encourages “dangerous” or “irresponsible” driving.

Gary Rae, campaigns director for Brake, a road safety charity, said the advert was “irresponsible in the extreme”.

Vauxhall said the ad had been approved by Clearcast, which was set up by broadcasters to vet commercials, “as it demonstrated the safety aspects of Apple CarPlay”.

There were 2,920 accidents in Britain last year where distraction in the vehicle was a contributory factor, making up 3% of all accidents. They included 61 fatal accidents and 384 serious accidents.

Researchers at the University of Utah found last year that drivers can be distracted for up to 27 seconds after using a voice command for their car’s entertainment system.

Highways England, which manages the country’s motorways and trunk roads, has a target to cut the number of people killed and seriously injured on the network by 40% by 2020.

O’Sullivan said car manufacturers must do more. “The use of technology in cars is being introduced more quickly than safety technology,” he said. “In reality the two should go hand in hand. If the user technology in the car is becoming more engaging, then it is essential that the safety technology is equally advanced and protects both the occupants of the vehicle and other road users.”

He said car companies should consider how long drivers were engaging with dashboard displays and introduce systems to remind them to concentrate on the road. They should also continue to develop automatic braking and anti-collision systems.

“They should pay equal attention to the devices that remind the driver that their primary objective is driving the car,” he added.

This weekend motoring experts highlighted how there were no legally enforceable standards governing the safety of car infotainment systems or mandatory tests for how distracting they were.

The legal onus is instead on drivers who, under the Highway Code, must “exercise proper control” of their vehicles and ensure that they are not distracted by “maps or screen-based information”.

Neil Greig, director of policy and research at the Institute of Advanced Motorists, has called for a “star rating” for car infotainment systems.

Tamzen Isacsson, of the Society of Motor Manufacturers & Traders, said more than half of new cars were sold with advanced safety technology, including autonomous emergency braking and systems that helped drivers stay in lane.

Audi said it introduced infotainment systems only after on-road and simulator testing. “Where this testing highlights the possibility of a significant threat to concentration this is addressed,” it said.